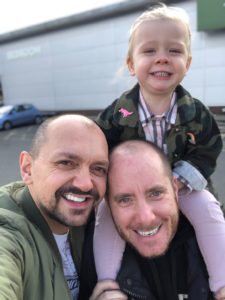 Michael and Wes run TwoDads.U.K documenting their journey to become Dads and working hard to raise awareness of surrogacy in the UK. Michale speaks at National Fertility events about their journey to become Dads, and the treatment of Intended Parents in the NHS – which still has a long way to go from an equality perspective as well as documenting their  journey for the likes of Surrogacy UK, The Fertility Road Magazine and the tremendous website Gays With Kids, who also happen to be following their next Surrogacy journey which the pair share with regular blog posts via their website twodaddies.co.uk

Michael and Wes have a clear mission, to educating everyone about Surrogacy and the journey same-sex intended parents (IP’s) have to endure and by doing this they hope to normalise that gays have kids too

Michael also runs Same-Sex Parents facebook page with a friend Steven Darby. Steven and his partner Connor have a little boy named George the same age as Talulah. The page was launched early in 2018 and is designed to bring other same-sex families together as we also hold regular meetups nationally. There is also a facebook chat group

In 2018, the work they do for Two Dads UK was recognised as the part were called upon to speak at an All Party Parliamentary group to give their lived experience as two parents through UK surrogacy. They met a number of Intended Parents, Healthcare professionals, Singles and representatives of International and UK surrogacy.

The discussions were about the glaringly obvious issues with the current surrogacy law regarding the parental order. Where the law is slightly out of kilter is that the surrogate and her husband are the legal guardians of your child.

What the pair would like to see is  similar to how it is in the United States, where paperwork submitted at the point of conception and granted at birth – currently, you have to wait for six weeks and one day for it to go into court